View cart “THE WACKY WINTER RACE” has been added to your cart.

From the creative mind of Jef Eaton (A.K.A. Kandu) comes an hilarious wand and a kid show comedy classic! Now available in the U.K. from Kimmo Magic Shop!

This has been a fixture in my show since it was first released. It’s been unavailable for some time, so I’m delighted to announce that Jef has given me permission to offer this latest version to performers in the U.K.

You pull out an unusual looking wand with a bright red letter ‘I’ sticking up from the top, announcing: ‘I got this wand at the APPLE STORE … It’s an iWAND!’
Acting shocked and chagrined at the groans from the crowd, you say: ‘Wait a minute, I have a better gag than that! Look! It’s an EYE WAND!’
You then reverse the wand to reveal a large eyeball on the other end!
After more laughs and groans, the eyeball starts to swivel back and forth, looking round the room, The children will waste no time to let you know, but you never seem to catch it in action.
Lots of ‘Look, don’t see’ fun can be had with the eye swivelling to look at you, only to quickly look away before you turn to check.
Eventually you spot the wand staring at you and reprimand it, twisting it to look at the audience instead. Once again, the minute you look away it swivels back to look at you. The kids will go crazy to let you know!
After milking this bit for all it’s worth, you yank on the eyeball and the wand pulls apart leaving you with an iWand in one hand and an Eye Wand in the other.
You hold them up triumphantly,  saying: ‘Hey look everyone, it’s an iWand 2!’
The two wands can then be given to audience volunteers to use when assisting you with your next trick.

This version of the iWand is made entirely from plastic. The Eye and the ‘I’ are 3d printed and there is no paint to scratch or chip off. It will stay looking good for hundreds of performances.

Thank you to Jef Eaton for a fantastic prop! For more of Jef’s creations, take a look at his website: kandumagic.com

By POP-ULAR DEMAND!* THE BALLOON DOGGY DERBY IS HERE! A brand-new version of Kimmo’s classic BIG RACE effect. A child takes on three adults in a wacky balloon dog race. Despite what seems like totally fair conditions, the child wins every time! … Read More 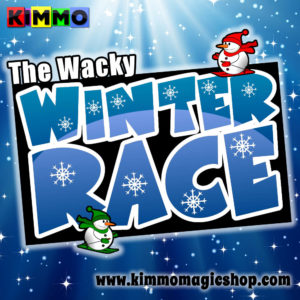 A FESTIVE VERSION OF KIMMO’S CLASSIC! It’s the fun and exciting game that is also a trick! The kids go crazy for this one and the adults are left scratching their heads and wondering how on earth it’s done! A … Read More